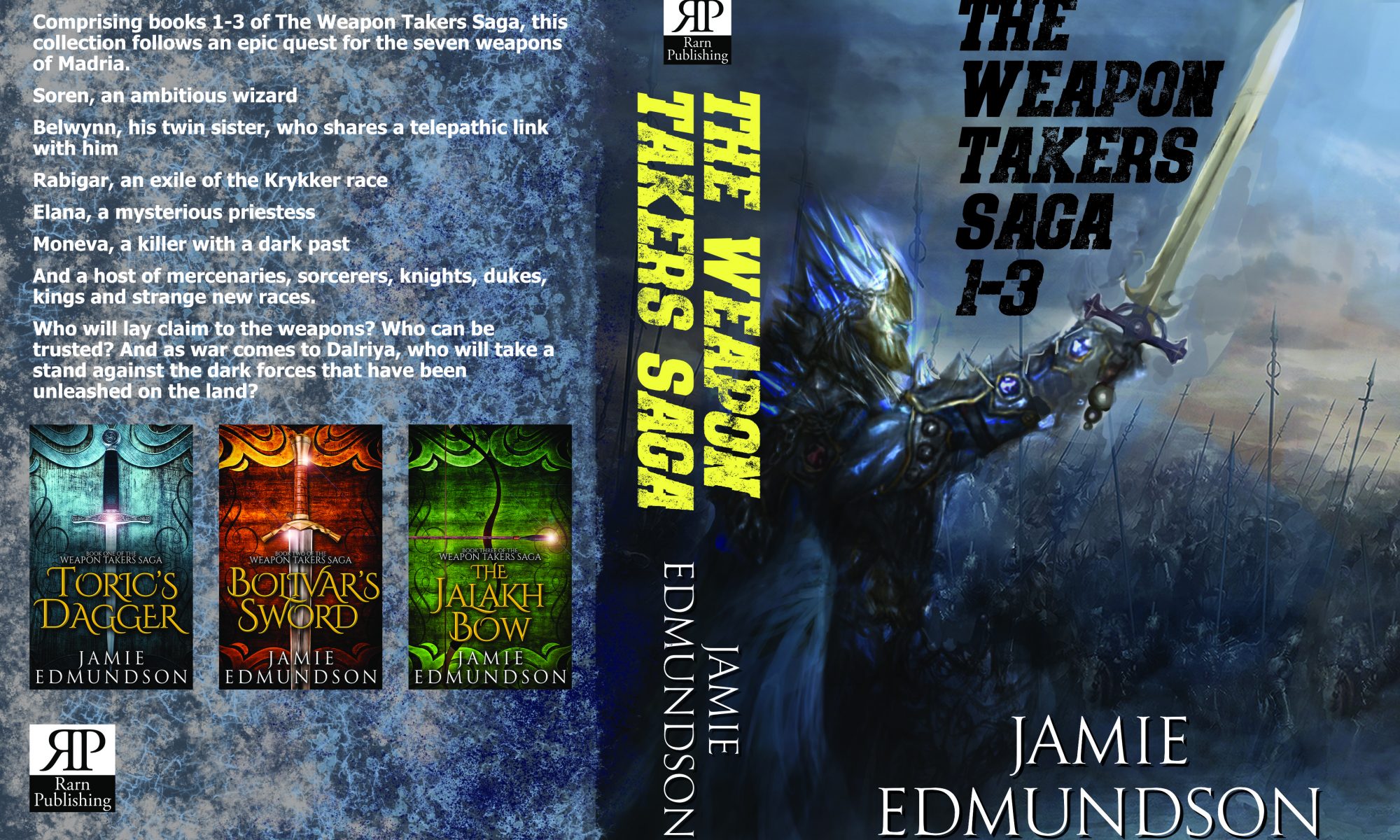 Until now, my omnibus title, The Weapon Takers Saga Books 1-3, has only been available as an eBook or Audiobook.

I’m pleased to say it is now available in paperback, too! Featuring three maps and clean formatting I’m really pleased with the way it has come out. It IS a bit of a brick, so check you have space on your bookshelf first! Or, just keep it by your bed and it can double as a weapon to stop intruders. 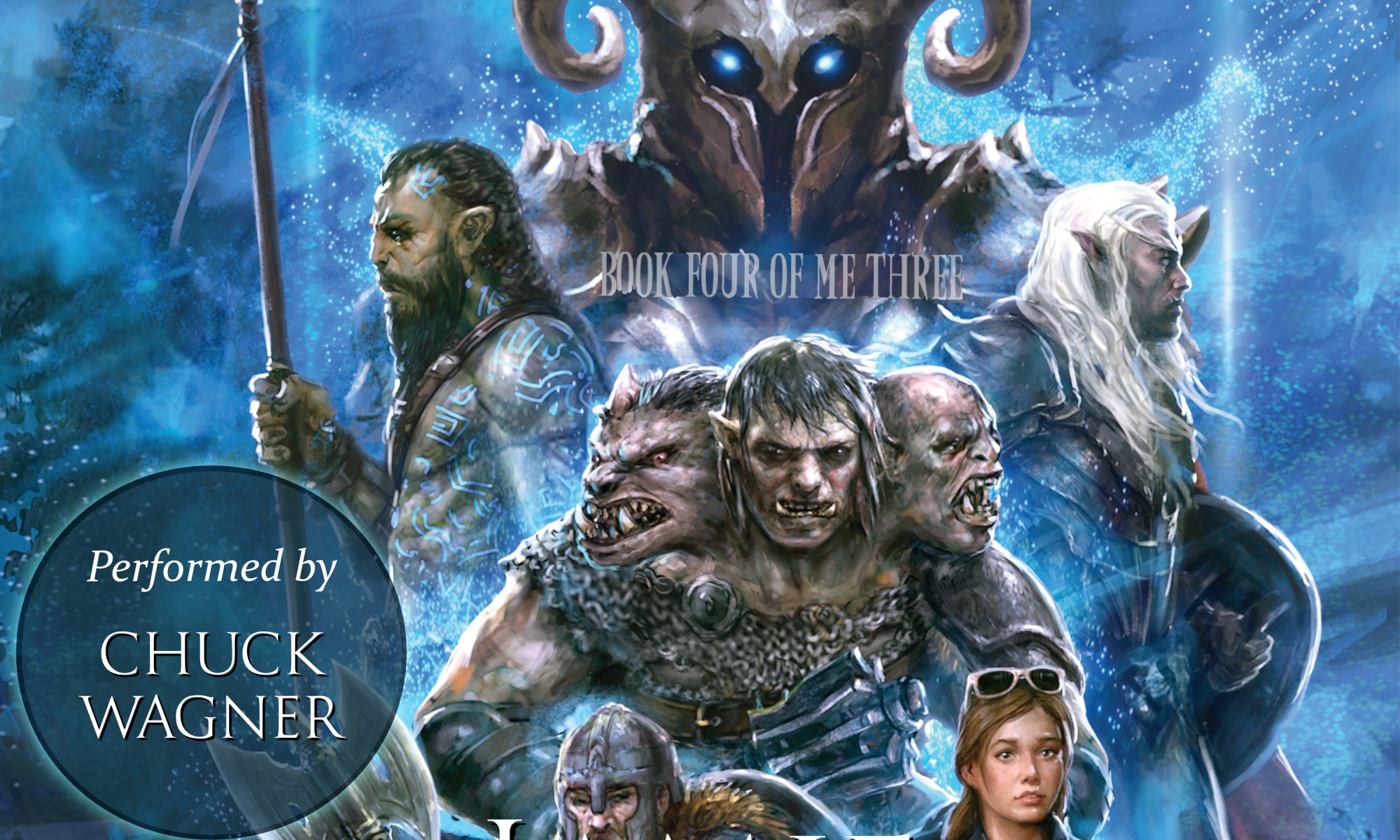 The final book of the Me Three series, Ogre’s End Game, recently got its audiobook release. What a fun project it’s been, listening to Chuck Wagner bring the series to life!

Even if the writing’s gone a bit slowly this year, I can content myself with the release of four audiobooks! It’s been great to hear the positive feedback for Chuck’s performances – thoroughly deserved.

Remember, this series is WIDE, so there are several options to pick up the audio – check out the audiobooks page of my website for all the details.

Og-Grim-Dog and The War of The Dead is now out on audio and is live in all stores.

I have updated my Audiobooks page: it’s now much cleaner and easier to see where you can buy the various titles. 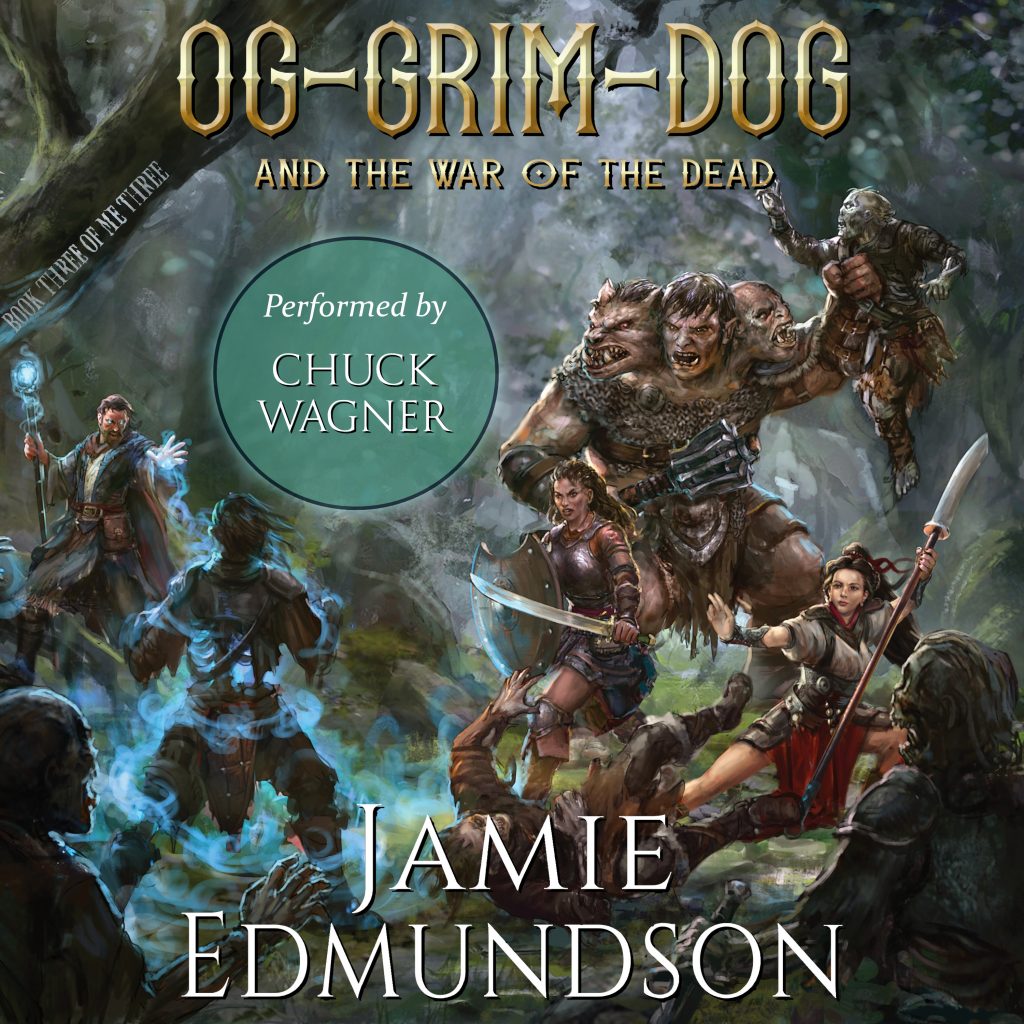 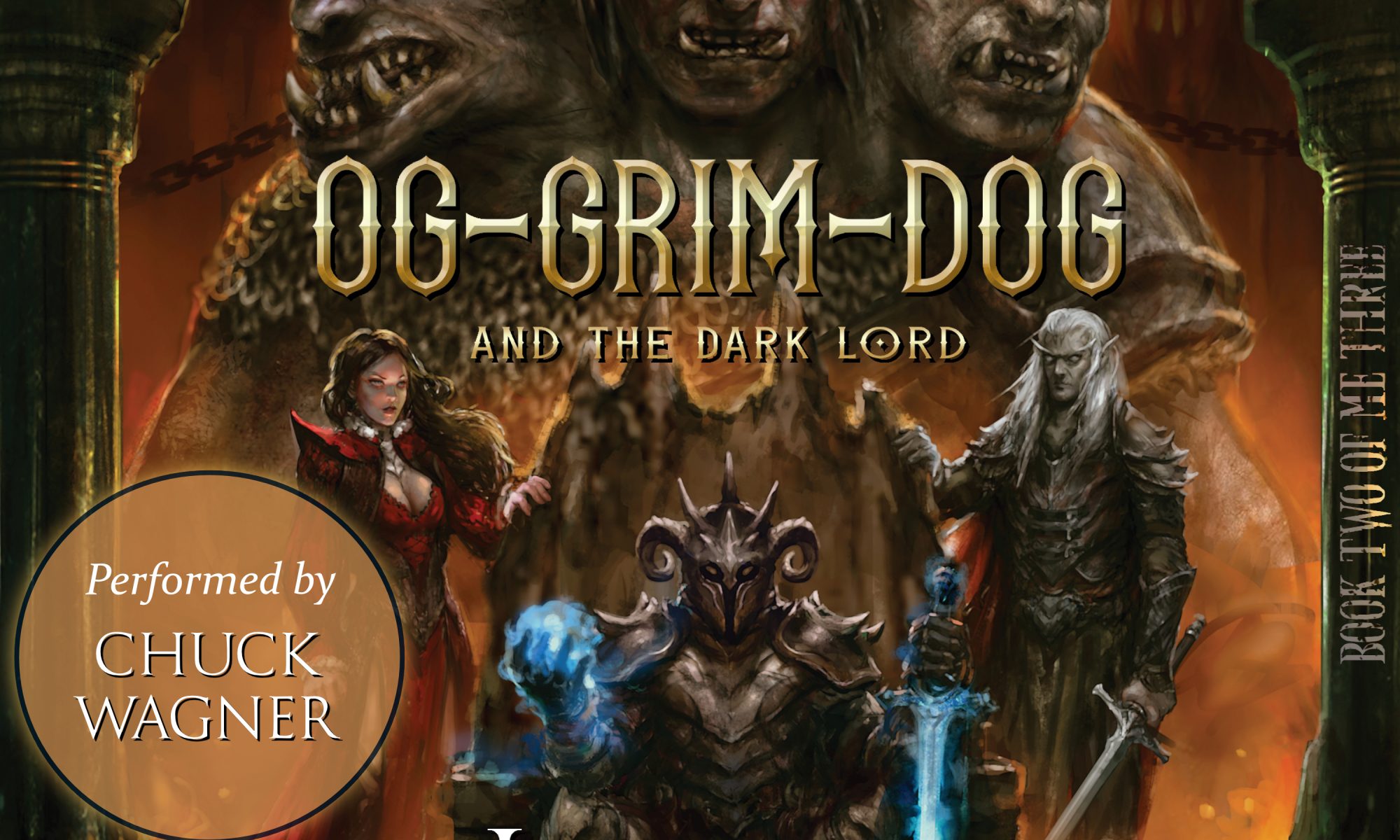 Feels like I’ve done a lot of plate-spinning recently, which means there’s lots of news to give you all at once this month.

Firstly, the audiobook version of Og-Grim-Dog and the Dark Lord is now published in all stores. See my audiobook page for the links. Chuck is already busy recording book three!

As for the eBooks, the entire series is now out of Kindle Unlimited and up on pre-order on all retailers stores. Check out the links here for book 1 which releases wide on May 1st. Og-Grim-Dog has got into the top ten (semi-final stage) in ISFAB – the Indie Sci-fi Fantasy Author Battle – the top ten are revealed here.

My short story collection, Mercs & Magi, releases as an eBook on June 21st. It’s now available, for free, for members of my newsletter.

Finally, I am hosting a Humorous Fantasy fair on my website. Check out the fun books and find a new series/author to read. 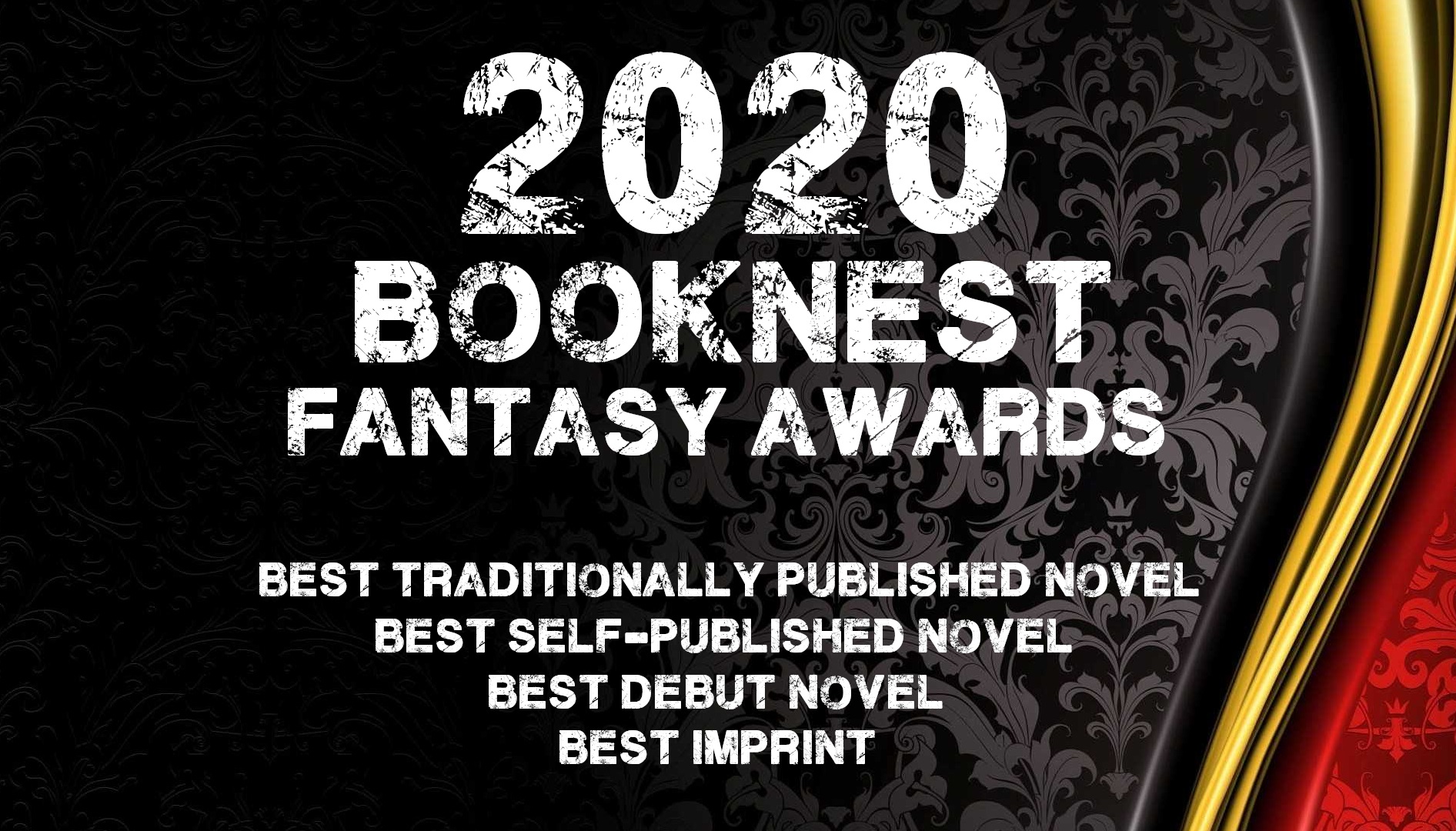 I’m busy as usual trying to get some writing done on a new series in amongst everything else. There are 2 big news items I had to mention though.

Firstly, Og-Grim-Dog and The Dark Lord has been longlisted in Booknest’s Fantasy Awards for best self-published fantasy of 2020. How awesome! There are 2 days left of voting for your favourite books so please go and take part.

Secondly, the audio for book one of the series is now live and for sale in most stores. I have all the links to the various places it’s on sale on the Audio Books page on my website. Chuck has already begun recording book two so hopefully there won’t be too long a wait on that one either!

I’m excited to announce that all 4 books of the Me Three Series are going to be recorded in audiobook format. 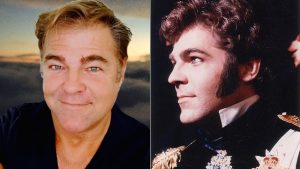 Narration is by Chuck Wagner. A cult legend in the sci-fi & fantasy world as the star of 80s TV series Automan & with a long career in the theatre, he has the perfect voice to take on the role of the infamous ogre, Og-Grim-Dog.

I have listened to book one and I can’t wait for people to hear this performance. The audiobooks will be released wide to all retailers and I will post more updates when I have them. 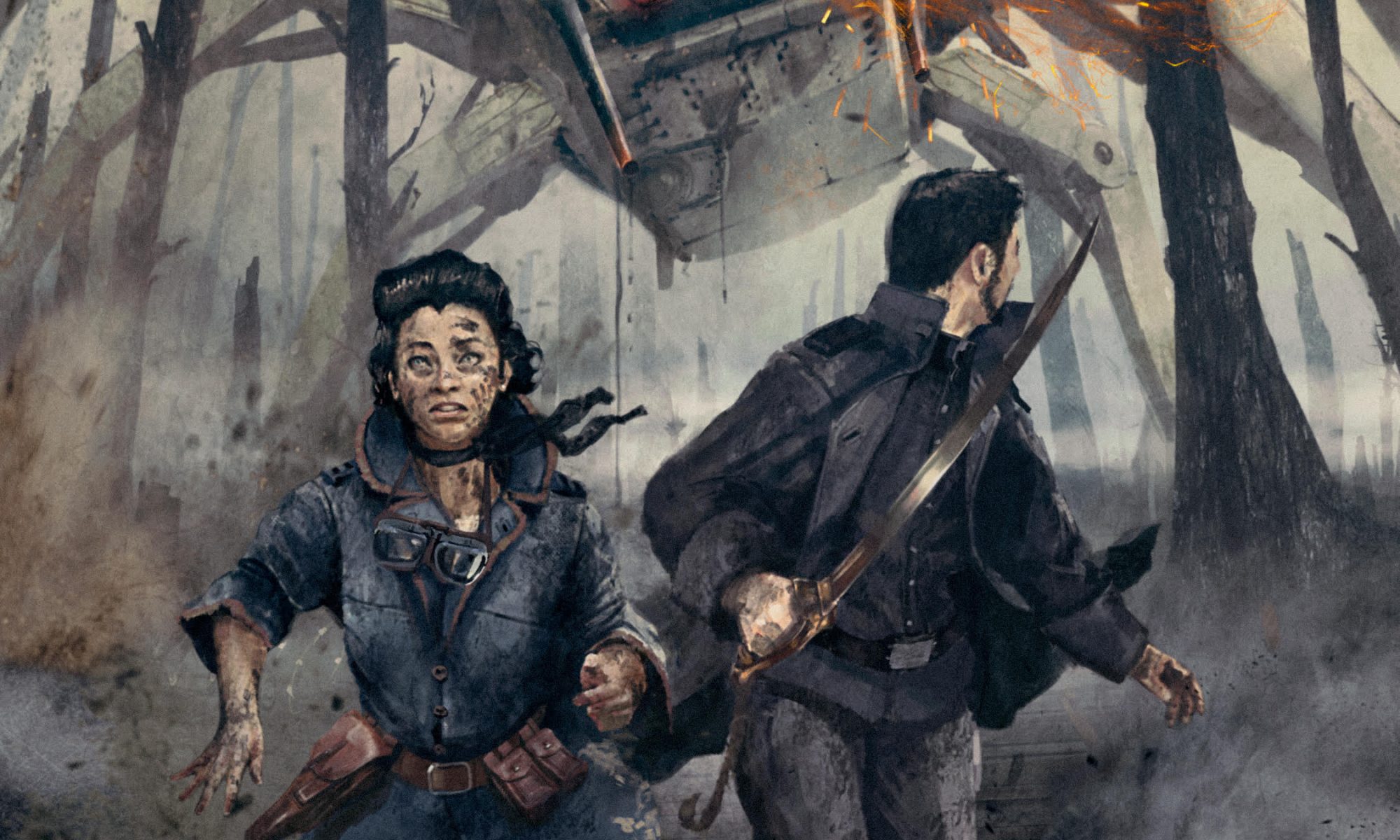 2021 looks set to be a writing (when I can) kinda year rather than a publishing year. There will definitely be some news on my current series coming, but brand new material will have to wait for 2022.

Given that, it’s nice to come out the gates of the new year with a short story featured in Grimdark magazine. Stiff’s Standoff was written as a piece of grimdark – a morally grey character, mercenary leader Lothar ‘Stiff’ Sauer, is trying to get by in a bleak world. Throw in some dark humour and you have (in my opinion) the classic grimdark blueprint. So it’s nice that the story has found its natural home in grimdark magazine.

You can check out issue #25 online at GDM or on Amazon/KU. 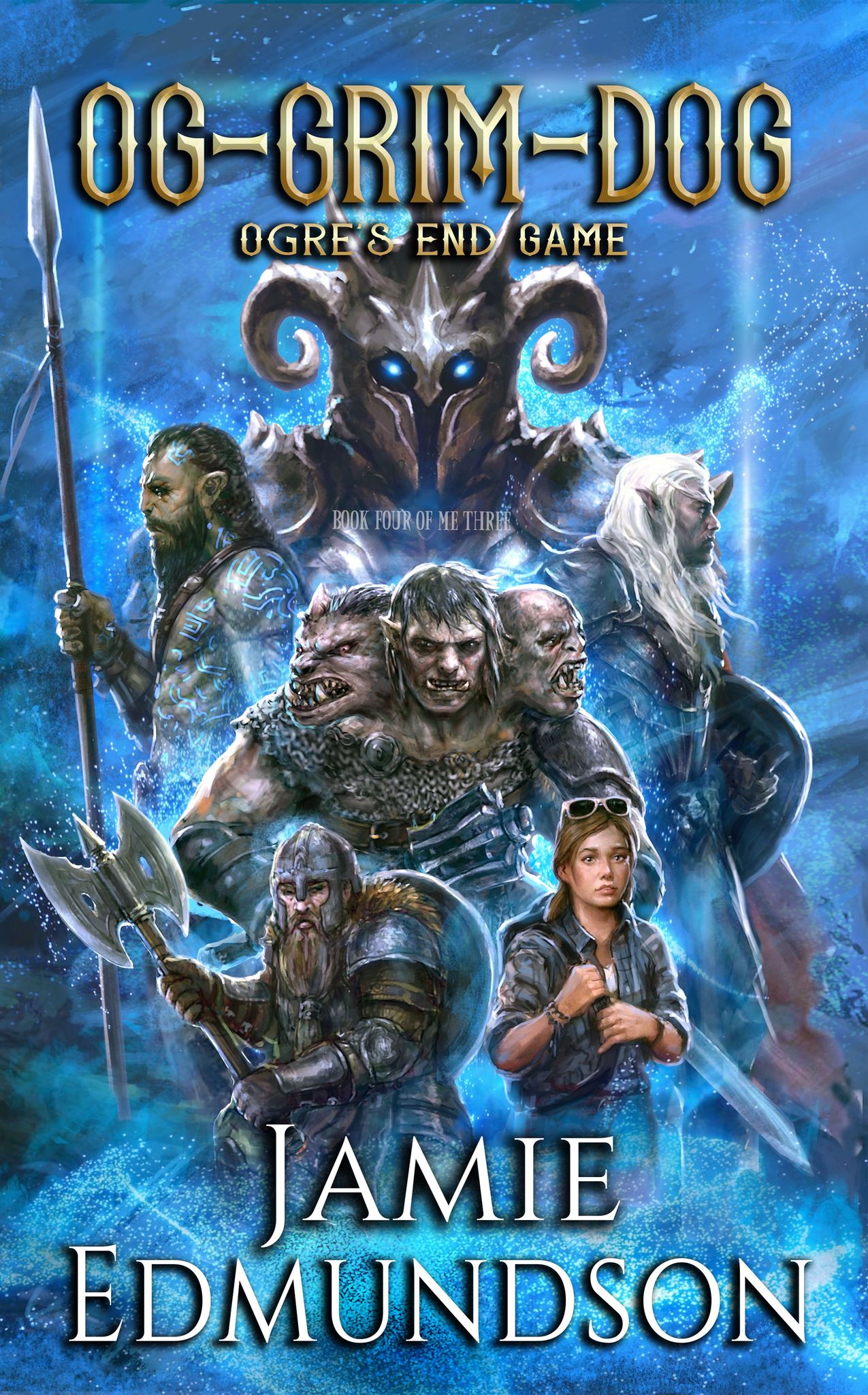 It’s not every day you finish a series, but here I am pleased to report that Me Three has come to its epic conclusion with the release of book 4, Og-Grim-Dog: Ogre’s End Game. Andrey has done another fantastic job with this one, evoking the world-hopping, time-travelling, superhero elements of this story with his cosmic cover.

‘It’s all too easy for everyone else,’ said Grim, ‘to leave people behind. They just walk away, with their own pair of legs; their own arms, and head. We’ve never been able to do that. We’re stuck with each other forever. But that’s our strength. We’ve been forced to work as a team. And we’ll get through this just like we’ve got through everything else. Because we’re not doing this for ourselves, or for each other. We’re doing it for everyone else. For the scattered and the lost. We’re the only ones left, so we have to see it through.’

The paperback is already available to buy and the official release date for the eBook is 1st December, but you can get it now on pre-order.

What’s next? Some kind of recharging is necessary after a hectic 2020 – it’s been one hell of a year, hasn’t it? Releasing a 4-book series in the middle of it all has been intense at times. But I have plenty of ideas jostling each other for attention to be my next series. It’ll be interesting to see which one wins! 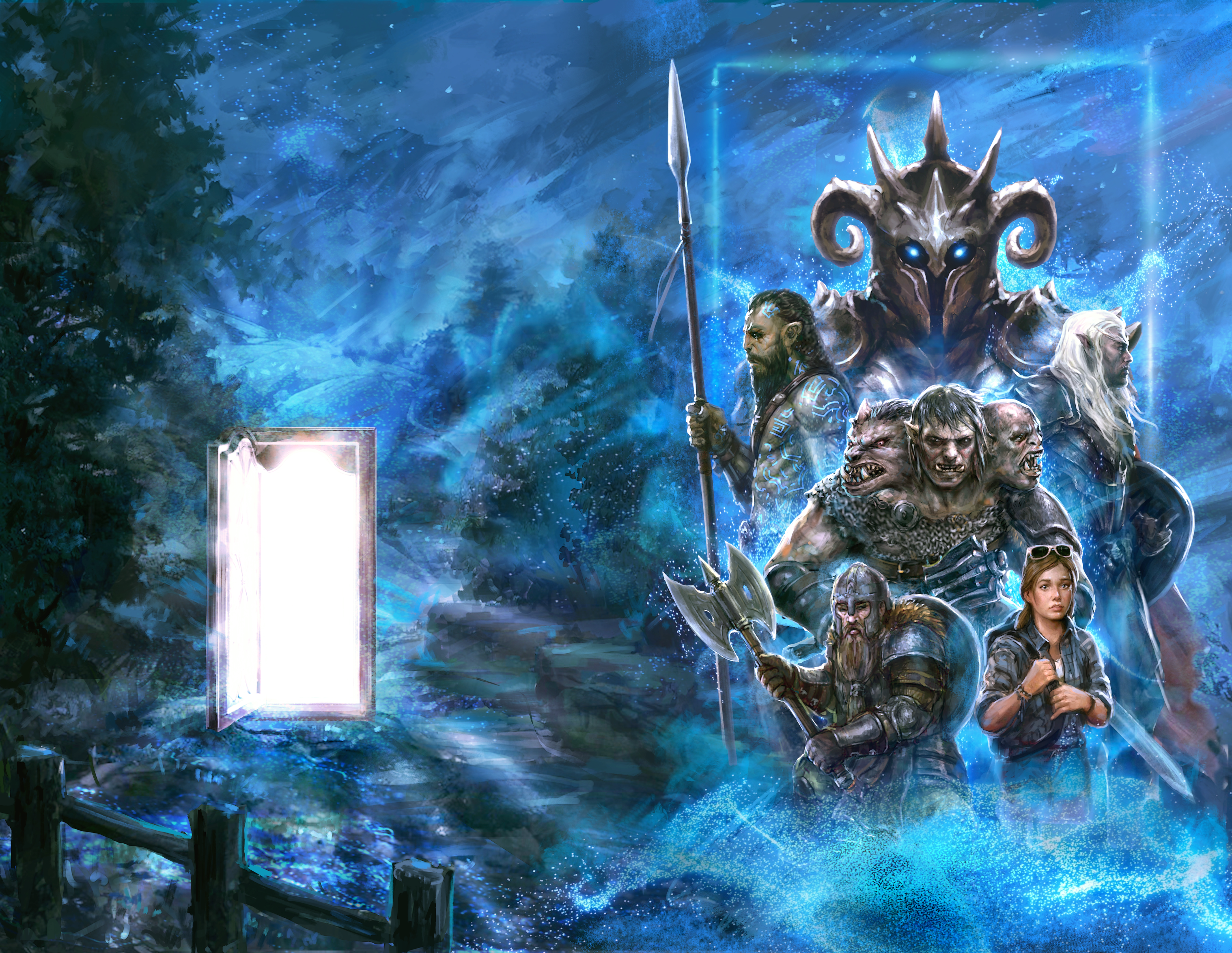 With the final book of Me Three due soon, I have great news for fans of the series. A tie in short story will feature in the forthcoming fantasy anthology, From the Shadows.

I’ve had a sneak peek of this and it’s an incredibly well presented book, on the theme of villains. There are some awesome authors involved and the book version is going to be available on all the major sites for free. It’s a really great way to get a taste of their work with some diverse approaches to the topic.

As for my story, it’s called Interview with the Dark Elf. It’s a paraquel story, set broadly at the same time as book three of the series, War of The Dead, but following a different character to Og-Grim-Dog. Some of it will make most sense for readers who are up to date with the series, but I hope it can be enjoyed by fresh eyes, too.

More details around the release to come. For now, you can bookmark it on Goodreads.

Finally, this month I’m celebrating the anniversary of the completion of my first series, The Weapon Takers Saga. The Giants’ Spear was published in November 2019. Man, that seems like a long time ago! Anyway, I have reduced my boxset of books 1-3 to 99c/p as a way to mark the moment. You can check this offer out here. 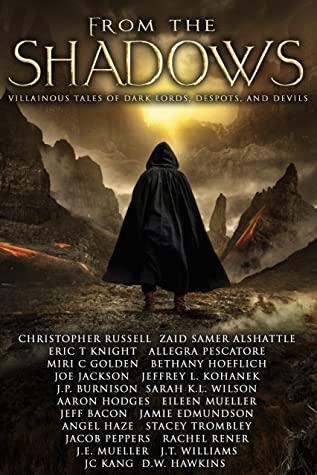 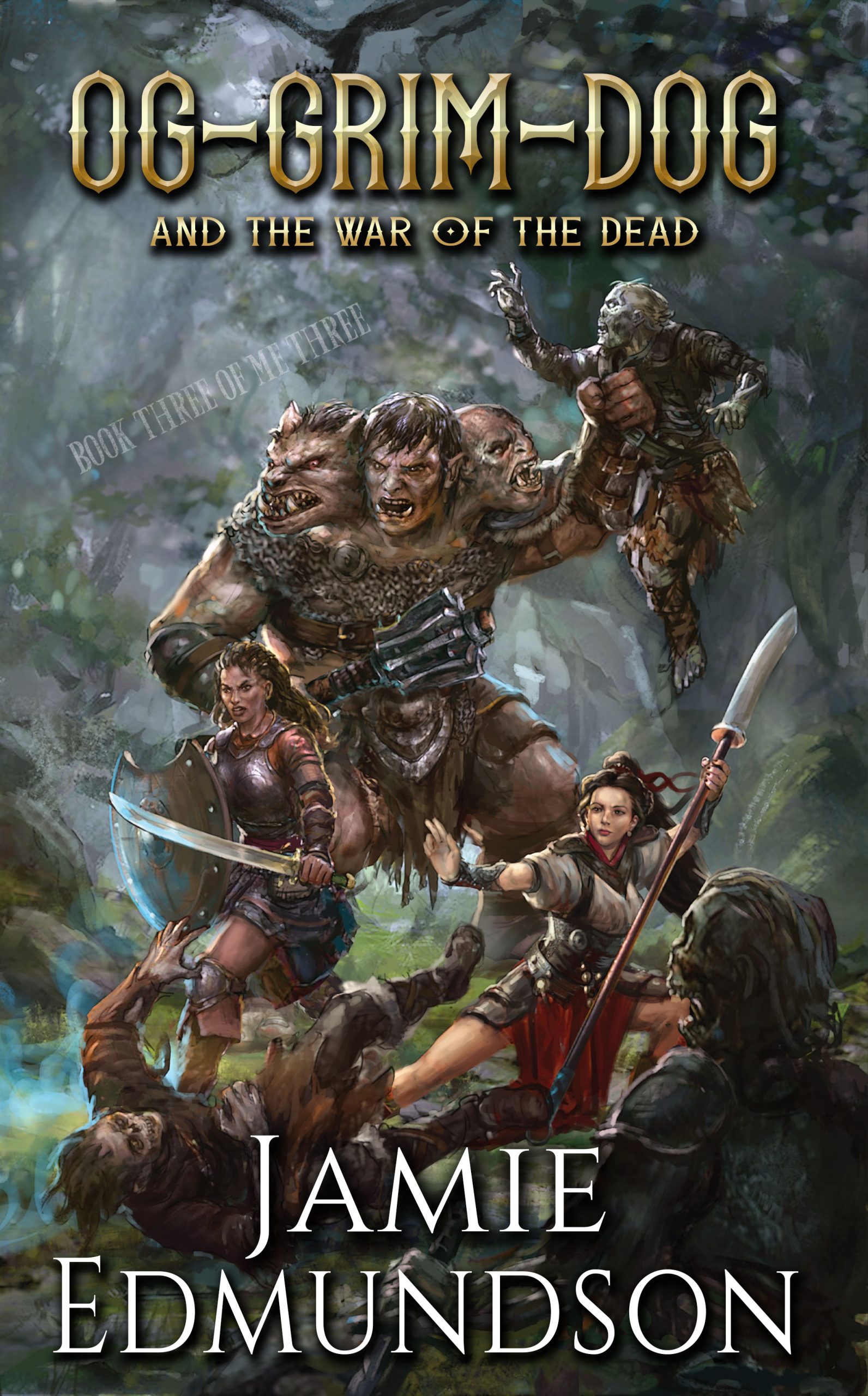 Take a gander at the new cover for book 3 in the Me Three series, Og-Grim-Dog and The War of The Dead.

This episode in Og-Grim-Dog’s story combines fantasy with horror as the undead arrive in Gal’azu. I think Andrey’s artwork nicely depicts the struggle as Og-Grim-Dog, Assata and Borte fight off the creatures! The back cover reveals that Raya and Sandon are also in the fight!

No surprises then that this is a darker tale than the first two books in the series, with the silly humour present but taking a bit of a back seat. Maybe that was inevitable since this was written at the height of lockdown.

The ebook will be released on 18th September, while the paperback should come not much later. 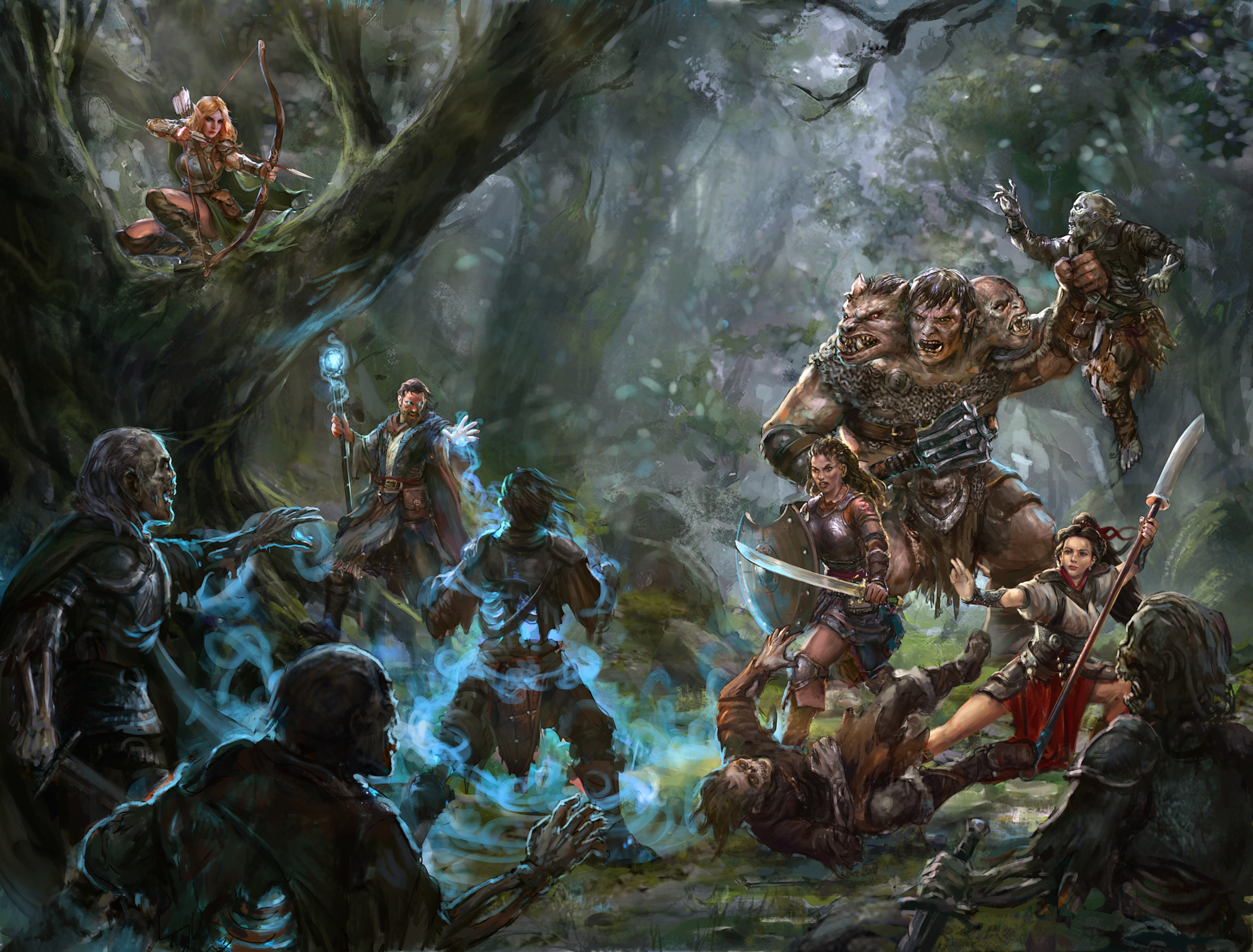 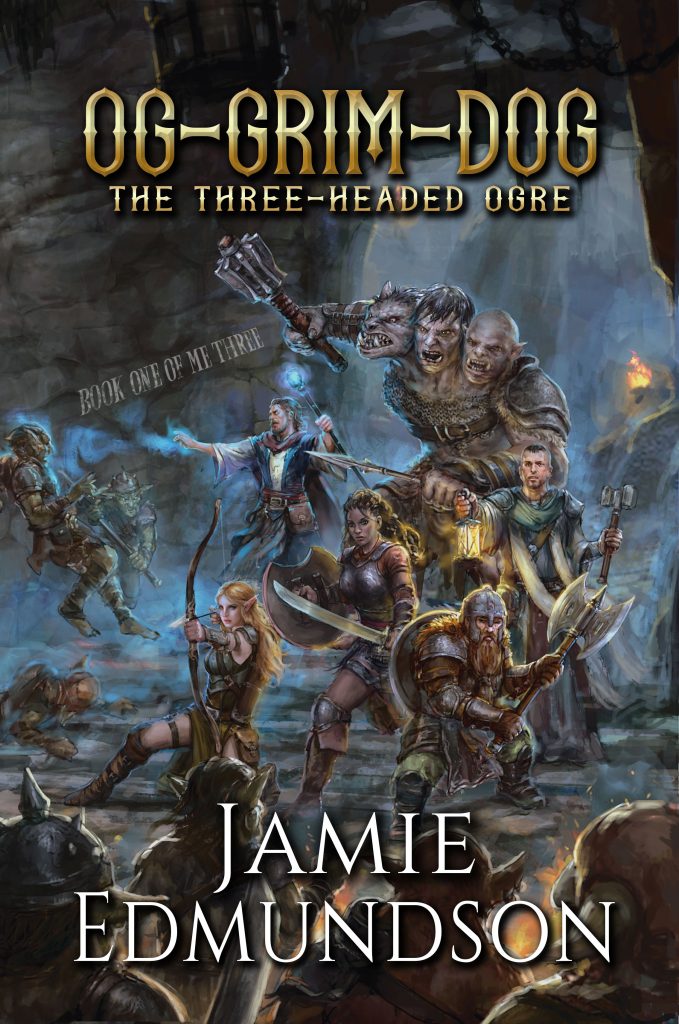 Audiobook of the month 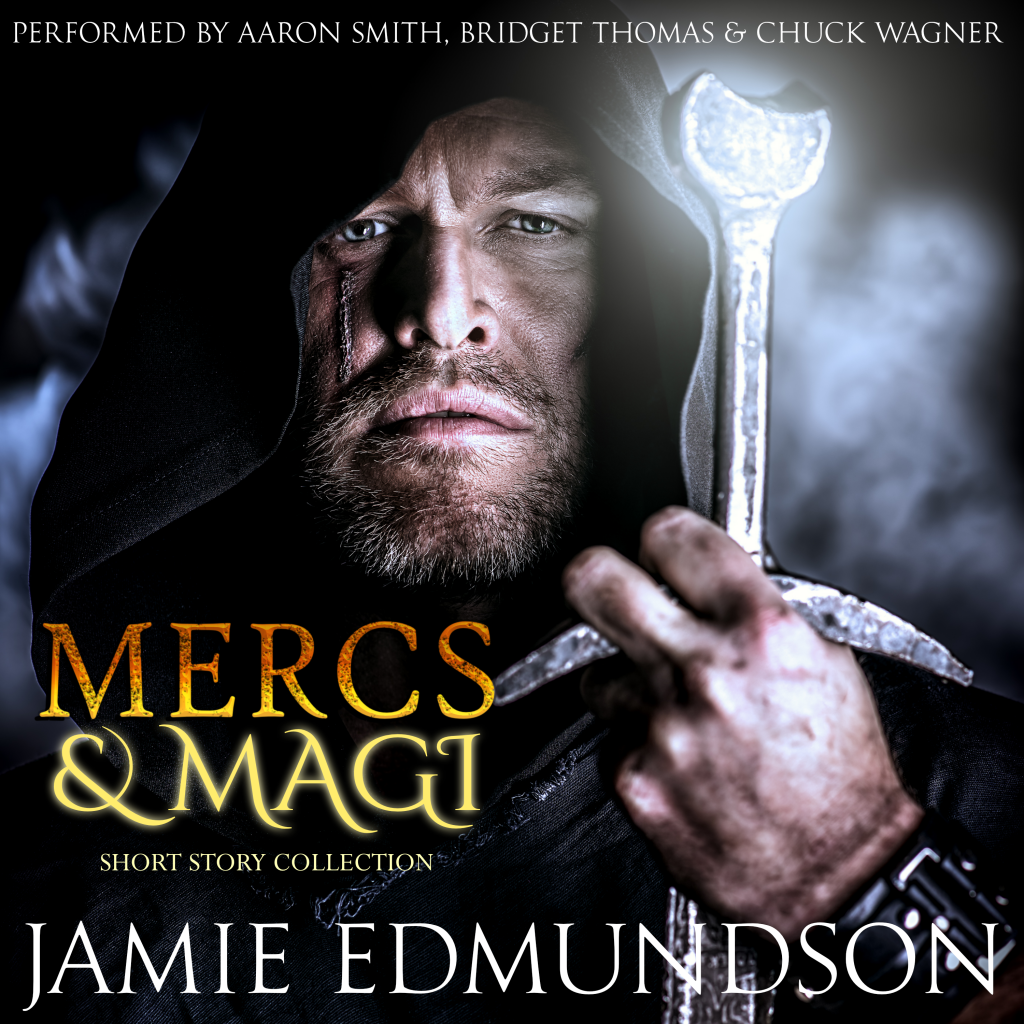